The thermoregulation issue in bats

Thermal images of small active mammals, such as bats, can prove challenging to explain. It was previously assumed that bats lose heat through the wings but that was already unlikely because bats fly energetically in hot conditions when convection becomes very inefficient. Thermal images of bats during flight are illustrated below with a Daubenton’s bat (Myotis daubentonii) left and two images of soprano pipistrelle bats (pipistrellus pygmaeus). These consistently show that the wings are close to air temperature and even the muscles appear cool as though they are adapted to run cool (as in ducks feet). The priority seems to be to avoid heat loss on a cold night.  There is no doubt that at rest bats suffuse the wings with blood for maintenance and repair but in flight the membranes have no excess temperature and therefore cannot lose heat.

Bats are not temperature tolerant and can die at temperatures over 40 degrees, yet they can fly with a body temperature of 38 degrees over a wide range of energy levels and ambient conditions. This requires a highly controllable cooling mechanism. A small 10 gram bat generates about a Watt of heat and without any obvious cooling mechanism should rapidly overheat, especially on a hot night. (Winter Y, 1998 and Reichard J.D, 2010). Evaporation is not practical in small animals because a 10 gram bat would need to evaporate its blood volume every 6 minutes. Bats should have evolved fur that suppresses infrared heat loss and experiments indeed show that the fur is opaque across the visible and infrared wavelengths. Yet many images seem to show brightly glowing fur as though the fur itself is radiating infrared. This prompted a closer look at the hair anatomy in small mammals.

Below is a serotine bat hair crossed with a European rabbit hair showing that the internal bands are replaced by external lobes. Since the dimensions are small compared with the wavelength of infrared, bat hair still behaves like a periodic refractive index change and we can still use the Bragg interference equations. Bats have tiny bodies yet in flight the fur forms an aerodynamic shape that holds even at flight speeds as shown in the soprano pipistrelle, Pipistrellus pygmaeus, image below. Working with bat hair is difficult because of a high susceptibility to static electricity and hairs readily gather positive charge. Bats may be using electro-static stiffening to generate a resilient pelage. Holding this charge in high humidity may have driven the evolution of bat hair. All bats use external features with sharp edges to hold charge but since the dimensions are small compared with the wavelength of infrared, bat hair still behaves like a periodic refractive index change and we can still use the Bragg interference equations. 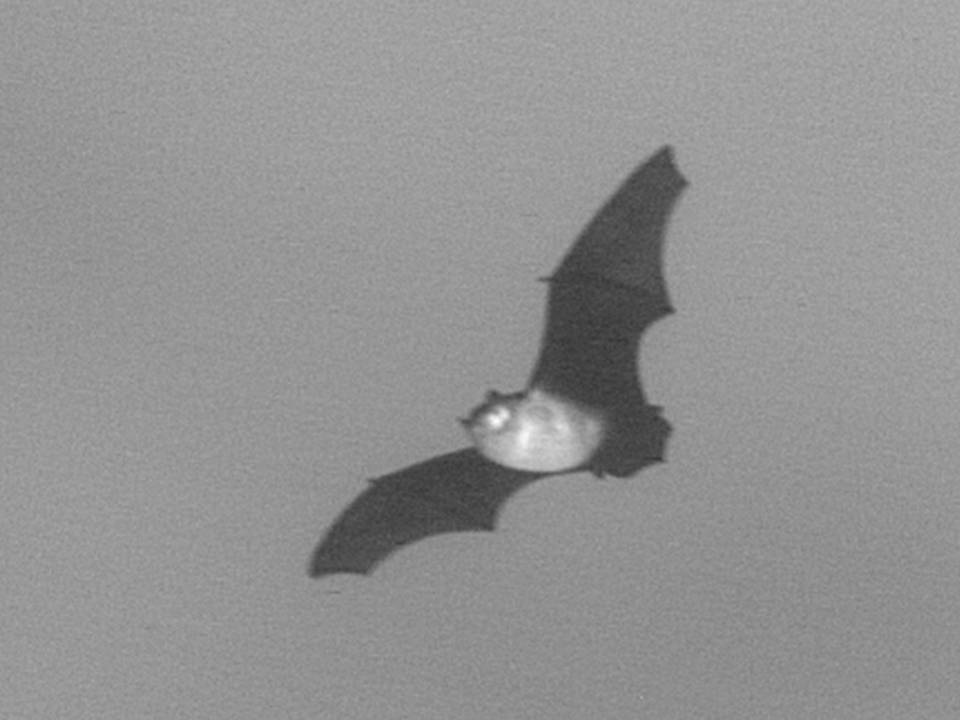 The fastest recorded bat the Mexican free-tailed bat, Tadarida braziliensis has hair that looks like stacked ceramic electrical insulators as shown below right compared with a more typical hair from big brown bat, Eptesicus fuscus. The pointed nature of the scales may be an adaptation to hold the charge even in high humidity. The photo is reproduced from a paper by Britten Sessions (“Is bat hair morphology exceptional?”, Britten D. Sessions, Chanell E. Nielson, John M. Sowa et al, Vespertilio 17: 171–183, 2014, ISSN 1213-6123)

The artists impression of barbastelle bat hair is shown here with a general oscillation and chirping leading into a more aerodynamic function near the tip. Only one phasing section is shown here but there are on average 4-5 per millimetre and these are the main disturbance features.

The phasing section is exemplified below. Here an extra lobe is inserted (on the lower side) so that the average lobe spacing is different between top and bottom. The ratio of 5 to 4 is the most common phasing pattern.

The working model is that the scale patterns diffract the photon to the escape angle. The ratio of scale lengths on each side has been logged in detail giving an average ratio of 0.809 which is remarkably similar to the average mole ratio of 0.800. Bats have very efficient broadband antennas because of the many interference combinations but, considering only higher order combinations, a likely wavelength range is between 14 and 18 microns.

Below is an example for barbastelle hair. 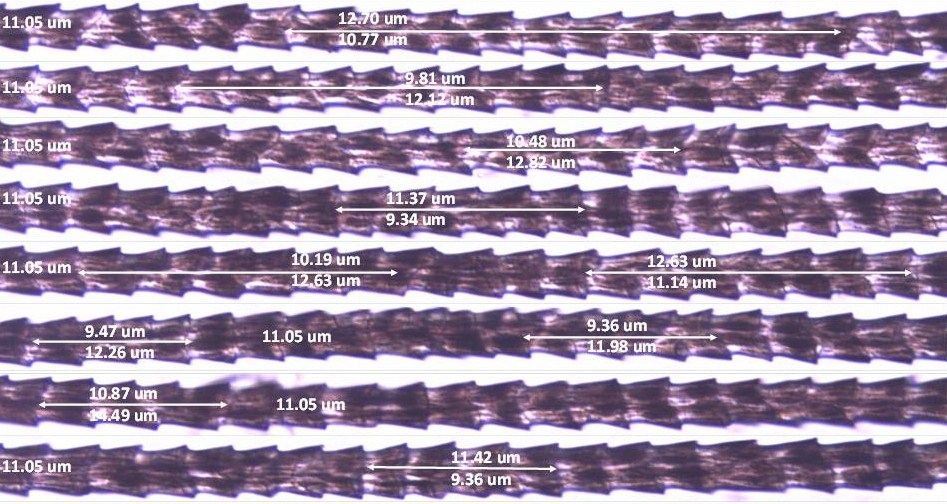 Bats have very efficient broadband antennas because of the many interference combinations as shown below.

If we take just 2nd order combinations and assume an effective refractive index of 1.25 the average tuned waveelngth is 15.18 microns with a range of 14 to 18 microns.

Far more bat species should be studied to form an opinion on the peak tuned wavelength. The theory about electrostatic stiffening of the individual hairs should be checked

Bats have the most need of any mammal to control their body temperature in hot conditions. Consequently the follicle anatomy should be the most advanced of all mammals. Expert microscopy is need to reveal the details of the follicle. Usually after extraction the bulb of the hair resembles a deflated football but twice the author has seen spherical follicles. Spherical follicles implies a resonant cavity with interesting consequences on the emission mechanism.