There are two types of thermal imaging camera: one senses heat energy and the other senses photons in a similar way to digital cameras. The former are termed uncooled detectors because the focal plane does not need to be cooled to achieve sensitivity although they are often temperature stabilised. High performance detectors utilise compound semiconductors similar to silicon but with narrower bandgaps that are sensitive to longer wavelength photons. These detectors need to be cooled to suppress dark currents hence they are often called cooled sensors or high performance sensors. 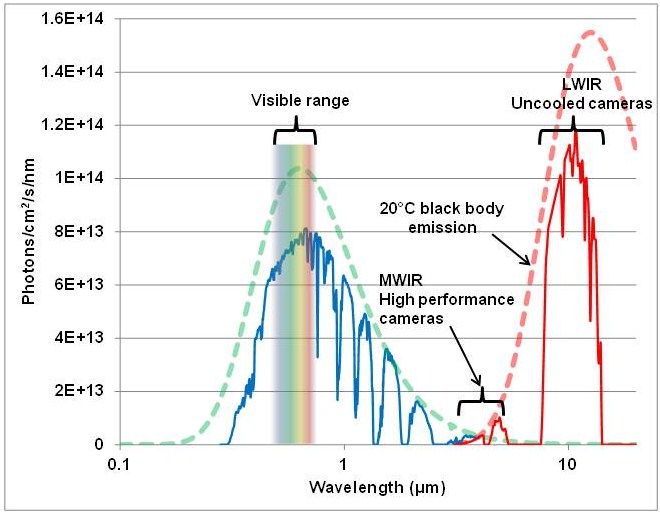 The spectra above illustrate the two atmospheric windows used for passive thermal imaging, notably the medium wavelength band (MWIR) at 3.2 to 5.0 µm and the long wavelength band (LWIR) at 7.5 to 14 µm. The photon flux in the MWIR changes by about 4% for each degree change in scene temperature compared with 2% in the LWIR so we say the thermal contrast is higher in the MWIR. The flux in the MWIR also matches well to solid state sensors so cooled cameras can easily achieve good sensitivity at normal broadcast frames rates (50 or 60 Hz). The majority of cooled thermal imaging is in the MWIR with some exceptions when the better transmission of LWIR through fogs and dust is needed or when solar imaging must be excluded. Dual-colour sensors that operate in the MWIR and LWIR on alternative frames have been developed and are commercially available from Leonardo MW Ltd.

High performance thermal imaging cameras that have cooled sensors have so much sensitivity in reserve that they can be operated with long zoom lens enabling much longer range and higher frame rates than uncooled cameras.

Photon integrating sensors are based on two material systems: indium antimonide (InSb) which has sensitivity to 5.5 µm, and mercury cadmium telluride (HgCdTe) which has a sensitivity controlled by the proportion of HgTe and CdTe in the crystal. InSb has most of the cooled thermal imaging market because it was the earliest to be developed. InSb focal plane arrays need to be deeply cooled to around 80K by small cryogenic coolers based on the Stirling cycle. HgCdTe is very flexible and the wavelength can be tuned. It requires less cooling which means cameras can be smaller and have lower power consumption.

Pixel sizes for commercial cameras are usually around 15-16 µm although the recent development trend has been for smaller pixel sizes of around 8-10 µm to reduce cost in large format arrays. This is still much larger than visible imaging CCDs because optical diffraction sets a limit to the pixel size of roughly the product of average wavelength and F/no. Array sizes can be much larger than uncooled arrays and HD 1024×768 and 1280×768 formats are used in the top-end cameras used in broadcast TV and nature documentaries.

Above left is the Leonardo Merlin camera produced by engineers at Basildon, Essex for nature filming. It has an F5.6 focal ratio with a 2 degrees field of view at maximum zoom. The camera is semi-automatic and video is captured on a 240 GB solid state drive with a duration of 4 hours. It can be supplied with lithium batteries that last 5 hours per charge. There are two cameras that have been built by Leonardo specifically for wildlife filming and available for rent. On the right is the Horizon camera that was originally designed for long range imaging but one of these has recently been made available for projects that benefit from long stand-off ranges. High performance cameras typically use focal ratios around F/4 providing a range advantage of 3-4 compared with uncooled cameras. They can also have fast frames rates with some cameras able to run at more than 1000 frames per second.

The Merlin camera can produce some stunning images 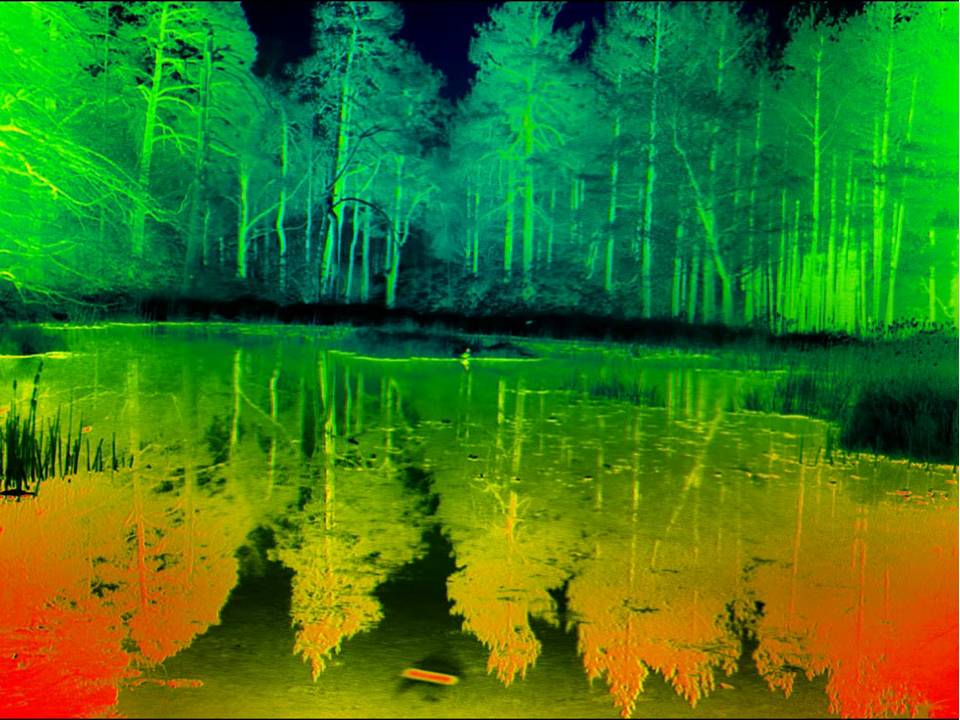 Uncooled thermal imaging sensors are designed to sense the heating effect of radiant energy. The pixel in these sensors consists of an absorber that is thermally isolated so a change in the radiation level causes a significant temperature change in the absorber. This often comprises a membrane tuned to the central wavelength. Many methods have been used to measure the temperature change but modern cameras tend to use three technologies. Historically the first to be demonstrated used a ferroelectric material (such as, barium strontium titanate, BST) operating close to a phase transition temperature so that the dielectric constant varies rapidly with temperature. In this case a capacitance change is sensed. These cameras require rotating choppers and temperature stabilisation and have largely been superceded by so-called microbolometers.  Here the absorber is made into a labyrinth of a material such as vanadium oxide (VOx) or amorphous silicon (α-Si) which both exhibit strong resistance change with temperature. In all these strategies the heat is converted to a voltage in the pixel and read out using a silicon device (as in all electronic imagers). Cameras are commercially available using these technologies and it is the lowest cost route into passive thermal imaging. This is a typical camera from FLIR extracted from their website. 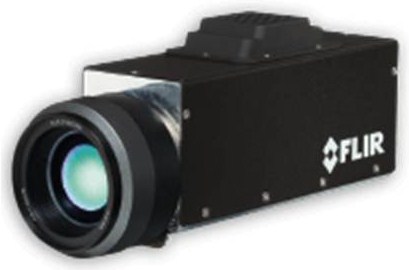 In the LWIR the photon flux is about 100x higher and the energy is about 45x higher so uncooled sensors that sense energy (as opposed to photons) naturally operate in the LWIR.

For ecology applications it is important to understand the limitations of the optics. Uncooled cameras need fast optics to achieve useful sensitivity and a typical focal ratio is F/1.2. For fast F/nos the diameter of the objective lens becomes an important issue because 8-14 um optics are made from germanium which becomes a cost and weight driver for the camera. The pixel size has decreased in recent years and is now typically around 20 µm. The degree of magnification can be established as a function of the diameter of the objective lens (D) using Equation 1.

Where Pix is the pixel size in µm, N is the number of pixels across the object of interest, Range is the distance to the object in km and Obj is the physical size in metres. Typically 20 pixels are needed to identify a stationary animal so for the typical conditions quoted above to identify a 20 cm long animal from 20 m requires a lens of 33.3 mm diameter. Equation 1 can be used to obtain the correct lens for the application.

Thermal imaging can be a very effective tool for animal biology providing non-invasive, non-contact radiant emission profiles that with care can be interpreted as surface temperature. Many of these studies can use captive or hibernating animals under controlled conditions and are suitable for uncooled cameras. Research topics include energetics, metabolic heat production and thermoregulation, providing information on blood flow, and sympathetically mediated vasoconstriction. Thermal imaging often provides new insights into the functions of different parts of the body. Factors that affect the thermal signature can be monitored such as: estrus, infectious diseases, injuries, stress and inflammations.

High performance, cooled cameras are of most value for studying the nocturnal behaviour of birds, bats, flying insects and mammals. It is not necessary to get close and so human disturbance is minimised. The improved sensitivity is invaluable for studying the energetics, metabolic heat production and thermoregulation of active animals especially whilst flying. Cooled cameras are more suitable for population assessment because the longer range allows a wider area to be covered. This is most effective in open areas and the detection ranges are at the kilometre scale even for small birds. Similarly the nocturnal migration of birds and whales can be monitored from many kilometres. An important topical application is to study the effect of environmental factors (human activities) on animal behaviour, for instance, bird movements around wind turbines.

The environment and weather conditions have a controlling effect on the efficacy of thermography. In daylight the sun can differentially heat objects and distort natural thermal emission so the best conditions are an overcast sky. Similarly a sunlit day can produce chaotic conditions during dusk as objects that were warmer in the day become colder at night but with rates dependent of the thermal mass. This is called the thermal crossover and lasts for an hour or so after twilight. Water masses and trees tend to hold a lot of heat into the night so the most sensitive thermal imaging especially for population surveys is at dusk. Wet weather conditions result in a flattening of the thermal contrast in the scene but the thermal signature of many animals especially birds is surprisingly unchanged.

Some terms that are frequently encountered in thermal imaging are explained here. Sensitivity is often quoted using the parameter: Noise Equivalent Temperature Difference, NETD and units are milli-Kelvin or mK. A typical value for uncooled would be 50 mK and for cooled 20 mK. In general any value under 50 mK will produce flicker-free images under normal conditions.

For quantifying radiative heat generation the Stefan Boltzmann Law can provide figures in terms of Watts per square centimetre as shown in Equation 2.

where e is the emissivity of the surface, r is the Stefan Boltzmann constant (5.679e-12 W/cm2/K4) and T is the temperature in degrees Celsius.

Emissivity is defined as the ability of a surface to emit and absorb radiation. The emissivity of biological tissues is said to be close to a blackbody (perfect emitter). An animal with an effective body area of 20 cm2 and temperature of 38ºC could emit 1.06 W. In practice insulation and the cooling effect of air reduces the surface temperature. It is important to recognise though that the animal will be receiving almost as much radiation back from the surroundings so the net heat loss is much reduced.