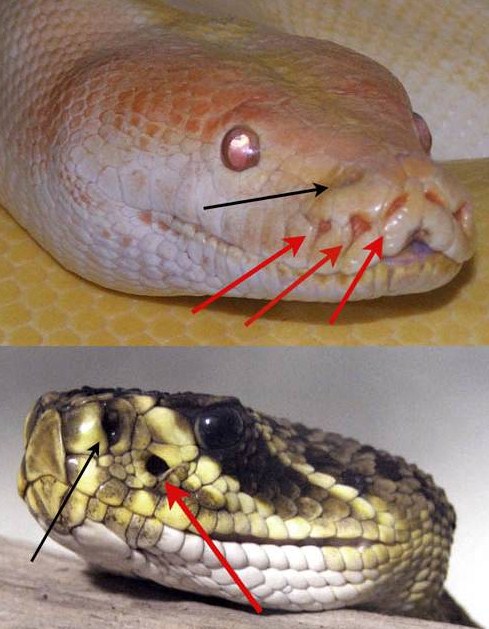 We need to distinguish between near-infrared and thermal infrared. Mammal vision is mainly in the wavelength range 0.42 to 0.65 microns. Nocturnal animals are able to sense much lower light levels than humans but in the pitch dark they are blind. Thermal infrared is the natural radiation produced by all objects around us as the result of a continuous interchange of energy between vibrating atoms and vibrating electro-magnetic waves. At normal temperatures the radiation has a broad spectrum between 3 and over 100 microns and peaks around 10 microns. Water vapour in the atmosphere absorbs much of the infrared spectrum but there is a window between 8 and 14 microns where the most energy is concentrated.

Small mammals, such as rodents, can be very active and bright in the infrared so it is not surprising that some snakes, such as: pit vipers, boas and pythons, have heat sensing organs for exploiting this.  Snakes have enervated membranes within a pit (red arrows) as shown in these images for a python and pit viper (photo citation needed). The sensors are bolometers, so that they respond to a change in temperature, exactly how modern uncooled infrared cameras function. Heat sensing is known in many other animals, especially insects, with the most well verified example: the terminal guidance of a mosquito.

Mammals have been evolving as night specialists for over 200 million years and thermal cameras show that animals behave remarkably normally in dark conditions. This is of course due to acute senses, the dark-adapted vision of nocturnal animals is celebrated (a barn owl sees a full-moon night of 0.25 lux as room lighting of 200 lux due to eye anatomy alone). However it is surprising that thermal vision has not been reported in warm blooded animals. The laws of physics do not prevent warm-blooded animals from having infrared sensors that can detect heat from other warm blooded animals and there should be strong evolutionary pressure.