Visible light and infrared are part of the electromagnetic spectrum that extends from gamma rays with a wavelength of a fraction of an atomic radius to kilometre scale radio waves. The part of the electromagnetic spectrum we use for vision is tiny, set by biological limits and extends from blue light at 0.4 μm to red at 0.6 μm.

In 1800 Herschel discovered heat in the suns spectrum beyond red which began a realisation of an invisible world of radiation called infrared. Later it was discovered we are all bathed in infrared from our surroundings – a result of a beautiful balance between vibrating atoms and electromagnetic radiation – continuously emitting and absorbing. At normal Earth temperatures this radiation centres on a wavelength around 10 microns and is called thermal infrared.

The natural world has been living with visible light and thermal infrared since the beginning. We have a good understanding of visible adaptations: vision, camouflage, retro-reflection, anti-reflection, iridescence etc, but we have only just started to understand infrared adaptations.

Light from the sun

Light from the sun is not due to a chemical reaction like the blue part of a candle flame or fluorescence like a low energy light bulb. It is somewhat surprisingly just thermal infrared. The inside of the sun is obviously very hot but the light we receive from the sun originates from an outer layer called the photosphere which averages 5778°C. This temperature determines the familiar solar spectrum with a peak intensity that we perceive as green light.

One of the Goldilocks querks of planet Earth is that our sun is at exactly the right temperature to produce the peak radiation where biological vision systems can operate. The best surface for emitting thermal infrared is called a blackbody and oddly the sun is almost a perfect blackbody just a hot one.

The sun is fairly inefficient for vision with 78% of the radiation being invisible infrared. At least this is better than old tungsten light bulbs, the filament of which ran at about 4000°C to produce only about 4% of visible light.

We take for granted that the atmosphere is transparent at visible wavelengths – another Goldilocks phenomenum. Over most of the infrared spectrum the atmosphere is nearly opaque and the world would be a dark place.

What is thermal radiation?

All matter above absolute zero temperature radiates electromagnetic energy and because it is not visible it is often underestimated. In a room at 20°C and normal indoor illumination of 300 Lux there will be a million times more infrared photons than visible.

Temperature is simply the vibration energy of atoms and at any one time atoms have a spread of thermal energy described by the Bose-Einstein distribution function. Light is emitted in quanta called photons whenever an atom transitions from an excited state to a lower energy state. Crucially this energy distribution determines that all bodies whatever they are composed have an emission spectra dependent on temperature only, so-called blackbody radiation.

Visible and infrared light emission from solids and gases was formulated in the early twentieth century and represents one of the major achievements in physics and quantum mechanics. The photon energy distribution was first formulated by Max Planck and Figure 1 presents the photon emittance versus wavelength for a perfect blackbody. The emphasis on photons here is because most animal vision and most electronic imaging devices sense photons. 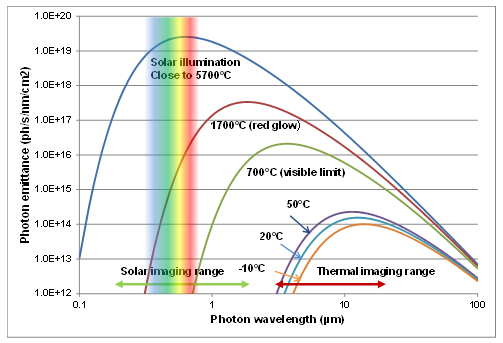 The Planck radiation law describes the photon emittance spectrum for bodies at different temperatures. Thermal infrared from room temperature objects has a broad spectral range from 3 to over 100 μm with a soft peak around 10 microns. The thermal contrast is very low and the photon flux only changes by about 2% per degree. The difference in flux between an object at ice temperature and 25°C is only a factor of two. Thermal images look to be of high contrast but that is due to signal processing and very sensitive cameras.

The reason we cannot see infrared is to do with the photon energy. At longer wavelengths the energy of each photon becomes progressively less. Human night vision extends to about 0.65 μm and nocturnal animals probably can see to 0.85 micron. Beyond 0.85 μm photons are not energetic enough to photo-isomerize organic molecules and it is thought to be the upper limit of animal vision. In the thermal infrared the photon energy is an order less than visible and individual photons cannot be sensed. Animals however can sense heat and we understand how snakes (pit vipers, boas and pythons) sense the body heat of prey but we have little knowledge if other animals have evolved the ability.

The thermal emission of photons is bound by strong laws of physics. There is a maximum energy that can be radiated by a surface at any given temperature. No surface sculpturing or optical devices can break this maximum value. For a body at 38°C this value is 0.063 W per square centimetre.

Nature abounds in adaptations to manipulate light. Many insects have iridescence as a result of complicated 3D sculpturing in the exoskeleton or wings. The rods and cones of mammal retina are tuned antennas to focus and concentrate the electromagnetic field to enhance chemical stimulation. In all cases the dimensions match or are slightly less than the wavelength of visible light. The graph below shows the solar spectra which originates in the chromosphere an outer layer of the sun that averages about 6000 degrees. Strangely the sun is a near-perfect blackbody and at this temperature the radiation peaks at 0.5 micron which we perceive as green. Most light adaptations, such as the carapace of this iridescent beetle by Adrian Thysse, are in the range 0.3 to 0.5 microns.  The bottom-left scanning electron microscope photograph, by Shinya Yoshioka of Osaka University, shows the complicated topology of a morph butterfly wing with features at 0.3 microns. Centre-left shows a photograph by Scott Mittman and David R. Copenhagen of rods and cones that are typically 0.3 microns in diameter. At normal ambient temperature blackbody radiation is shifted well into the infrared with a peak at 10 micron. By analogy to the visible we expect infrared adaptations to be in the range 7 to 10 microns. The hair anatomy of the mouse is a good example of infrared engineering with two hair types illustrated below.