Just over 100 years ago William Laurence Bragg and his father William Henry Bragg  received the Nobel prize for discovering the diffraction of X-rays from crystals providing a powerful tool for studying the structure of crystals and complex molecules. X-rays and neutrons have a wavelength that is comparable to the interatomic spacings within crystals and when reflections from parallel planes of atoms interfere constructively there is a peak reflectance. With a knowledge of the wavelength the atomic structure can be determined by studying the angle of the reflections. 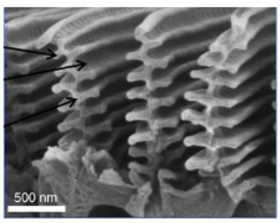 On a larger scale, volume Bragg gratings consist of a material with a periodic change in the refractive index. Depending on the periodicity and angle of incidence some wavelengths are reflected and some are transmitted.  Very complex 3D patterns on some beetle carapaces and butterfly wings result in flashing iridescence. In these cases the scale  of periodicity is of the order of 100s of nanometers as in this morph butterfly on the right. It is remarkable that highly repeatable nano-scale engineering can be performed in chitin during the pupae phase. Infrared wavelengths are more than an order longer than visible so infrared adaptations in nature should be trivial in comparison. In general any periodicity of between 7 and 14 microns should be suspected of having an infrared function. The microscope photograph of mouse hair below is typical of most small mammals with a characteristic banded structure. The band spacing ranges from 7.3 micron for small rodents to 9.0 microns for larger mammals such as rabbits. The two smaller hairs have dark bands which have a higher refractive index. In some larger mammals the gap in between becomes air filled. 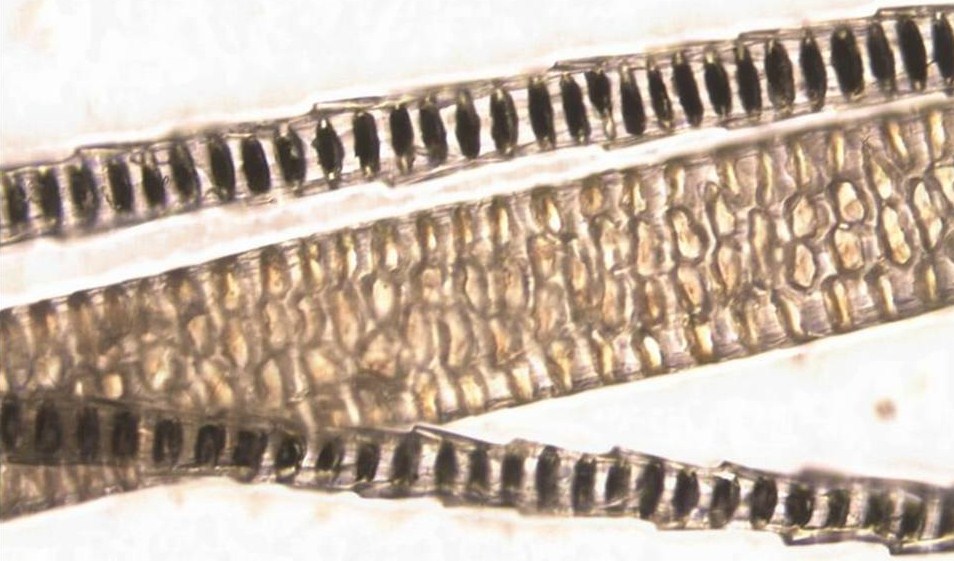 Fibre optic engineers would interpret this banded design as a Fibre Bragg Grating, FBG, which uses periodic refractive index changes to manipulate light transmission in a fibre. FBGs either reflect or transmit a given wavelength by interference. So if all the reflections from the refractive index changes are in phase it reflects, out of phase it transmits (like the blooming on camera lens). This typical image is from a paper by Nezih Mrad and co-workers and is published by SPIE (92021J (2014); doi: 10.1117/12.2063103).

We can therefore analyse hair anatomy using very simple FBG equations as shown in this summary.

The problem with the older databases is that they take measurements at the centre of the hair. To identify the function of the hair the measurements need to involve the whole hair because it is the pattern of banding that reveals its function. The two smaller hairs above are the most abundant in the fur of small mammals and are characterised by an oscillating and chirped band spacing (generally decreases towards tip) with a cuticular pattern that is roughly proportional to the band spacing. On average the band spacing oscillates down by a factor of 0.8 and up by a factor of 1.22 often changing abruptly. The examples below are from the European mole.

Mammal hair seems to be based mainly around 2nd order Bragg interference. The order just indicates the number of wavelengths between the reflections. The tuned wavelength is given by: d = 0.75λ/n, where d is the band spacing, λ the wavelength and n the effective refractive index. The interpretation of this hair form is a FBG with band spacing fluctuations to diffract photons to the escape angle. At a simple level if the effective refractive index is 1.25 the change in band spacing should be 0.8 to diffract the tuned wavelength to the escape angle. For the mole hair example above the range of wavelengths over which this design would radiate is 10 to 17 microns. FBG designers try to avoid sudden changes of band spacing because they wish to minimize radiation. The specific oscillation pattern of mammal hair is probably to control the emission lobe in the forward direction so the infrared is radiated outwards.

Infrared thermo-regulation and the case for bioluminescence.