How do bats track and catch tiny midges?

The soprano pipistrelle (Pipistrellus pygmaeus) is a small bat that was only formally separated from the common pipistrelle (Pipistrellus pipistrellus) in 1999. The two species look very similar and often the easiest way to tell them apart is from the frequency of their echolocation calls. Soprano pipistrelles usually feed in wetland habitats in Britain, for example over lakes and rivers, and also around woodland edge, tree lines or hedgerows, and in suburban gardens and parks. Where the author lives in Romsey soprano pips abound and swarm over Fishlake Meadows. The images shown here were filmed on August 13th 2016 at Moot Pond, Downton, Wiltshire. The Merlin HD thermal camera was focused at 20 metres in mid-air over the pond and left recording for opportunist fly-bys. The images here were the best of 4 hours recording.

The most striking feature of filming soprano pipistrelles is their sheer skill at hunting tiny midges. These are located at up to 3 metres away by echo-location and from that point the eyes and ears remain firmly fixed on the target. Even at closest approach just before the midge is captured in the tail membrane the eyes are fixed on the midge as shown below. The right hand image shows the midge desperately trying to escape sideways but it is swept by the wing into the tail membrane. The whole feeding action takes about 0.12 seconds and in real time looks like a flick of the wings. 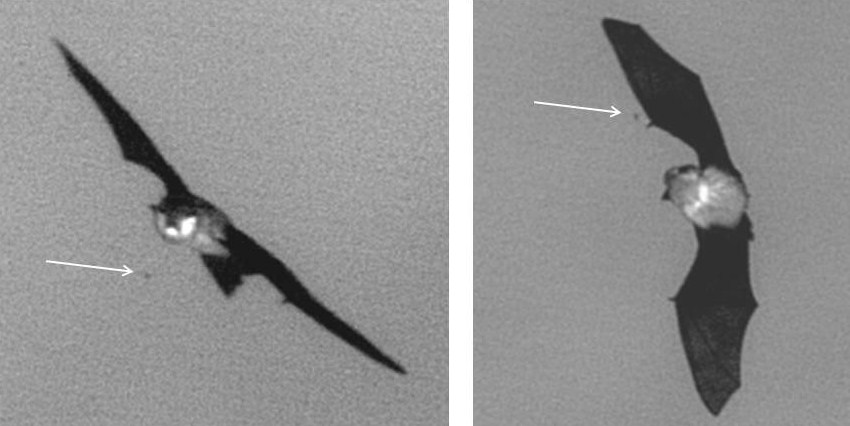 The multiple images below show the final metre of flight. Each image is separated by 40 milliseconds and the bat is closing at about 3.5 metres per second. At the final instant the tail membrane performs an air-braking action and the midge is eaten from the tail. Eating takes about 40 milliseconds. 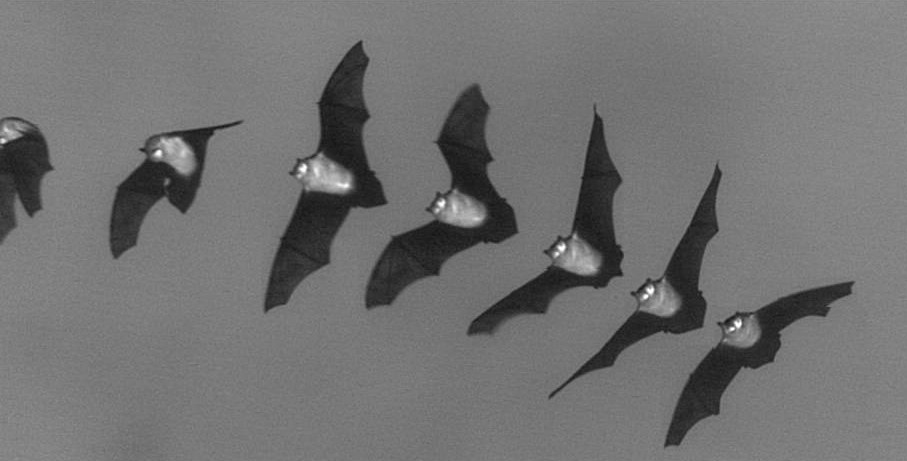 In this image the bat needs to contort to follow the panicking midge (can you see it) but fixes its face squarely at the prey at all times.

Soprano pipistrelles produce pulses of ultrasound for navigation with a frequency between 55-60 KHz at peak energy. It is reported that most bats have an astonishing adaptation to conserve energy. The heart, lungs, wingbeat and echo-location calls are synchronised. In level flight we find the wingbeat of soprano pipistrelles is 12.5 Hz and this exactly matches the frequency of the navigation pulses. The ultrasonic pulses emitted by bats can be recorded. The spectrogram below is taken from an Echo Meter manufactured by Wildlife Acoustics. The vertical scale is the frequency in KHz. The horizontal scale is in milliseconds. Most bats have a descending frequency pulse that in sopranos lasts for 5.5 milliseconds. The bat will fly about 30 cm between pulses at a normal flight speed of 3.5 metres per second. 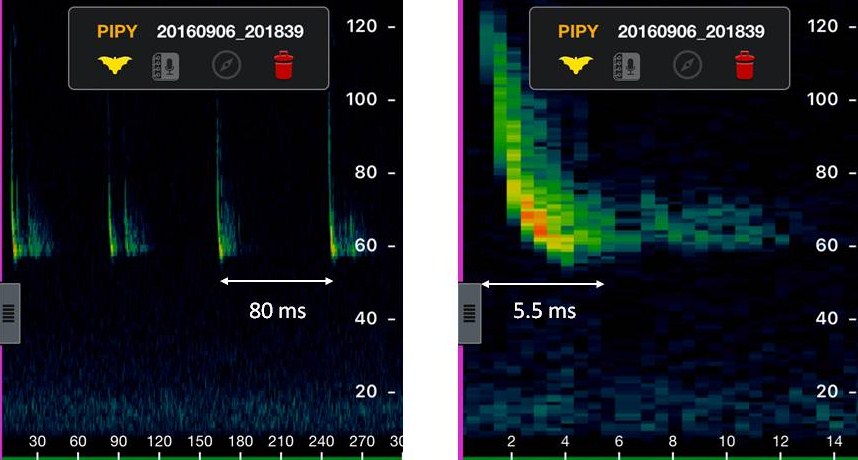 As the bat gets closer to the midge it needs more frequent information on the targets position. It does this by progressively increasing the pulse repetition rate so in the final stage it is a factor of 16 faster. At the same time the pulse duration drops to less than a millisecond. It needs to do this because at 15 cm range the echo time drops below 1 millisecond and separating the echo from the pulse is a major challenge. For a reason that is not understood the frequency of the final stage drops to 40 KHz. After feeding the bat is quiet for up to 200 milliseconds. 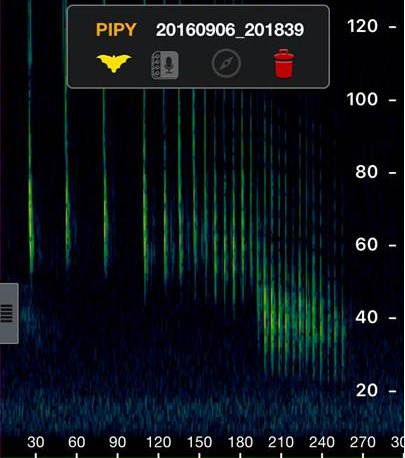 In the spectrograms of the final stage shown below the sharpness of the emitted pulse can be seen and it may be an explosive click that it is interpreted by the Echo Meter as 40KHz. At 3 cm range the echo is only 0.2 milliseconds. 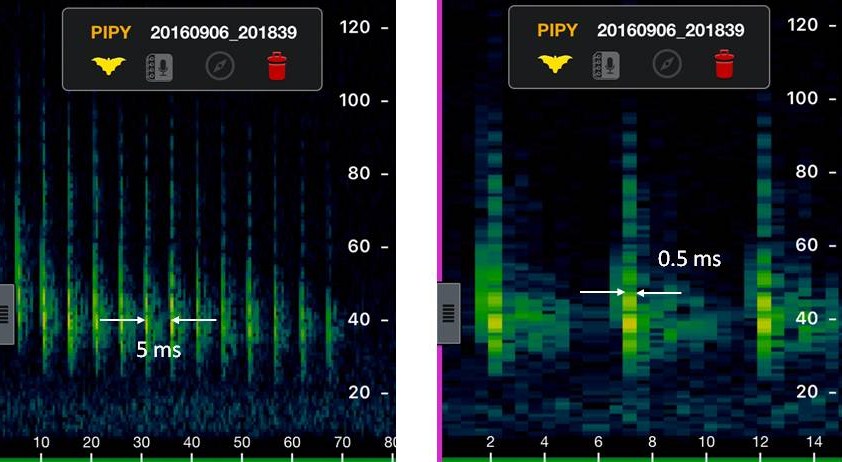 Four spectrograms have been joined up to cover the whole range from the first location of the target to capture. The horizontal scale counts back in 40 millisecond steps corresponding to frames of the Merlin camera. First detection occurs at 700 millisecond which at normal flight speed is 2.5 metres. The ultrasound pulses then appear to jump to twice the wingbeat rate. At 150 millisecond the frequency speeds up and for the last 60 milliseconds peaks at 200 Hz.

The spectrograms are obviously for a different incident but it is interesting to overlay the echolocation pulses on the multiple thermal image. 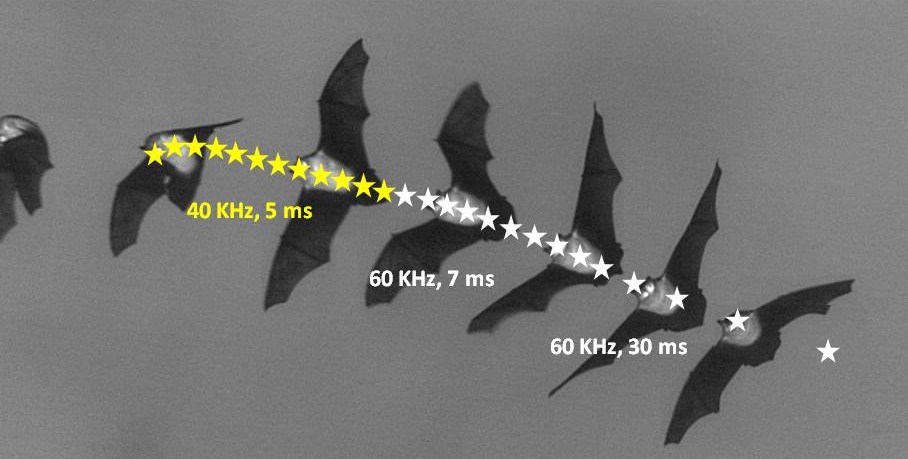 The sequence illustrates how the pulses speed up over the last metre and in the end-game uses a pulse every 2 centimetres of flight. Even this frequency relies on predicting the next position of the midge. This may be how some moths can duck away at the last moment and is a weakness with echo-location. For the last few centimetres it seems almost inconceivable that the echos can be resolved and perhaps other cues from sound, air disturbance or even visual  take over.

It will be interesting to get the opinion of control specialists on how close bats are to the theoretical limit.