The L. A. Hausman database published in 1920 (see reference at the bottom) describes the hair anatomy of over 300 mammals and 60% of the ground-based mammals listed have internal bands with dimensions in the infrared wavelength range, typically 7.3 microns for small rodents, rising to 9.0 microns in larger rodents. All the bats in the Hausman database have external features with periodicity in the 7 to 15 microns range. It is a testement to the Hausman team that at the time it was probably considered academic but 100 years later is an invaluable source to advance our knowledge of mammal physiology. Sessions, 2014, confirmed the pattern for 17 North American bats. We do not know the position in the hair shaft that the data was measured since we know now that it varies down the shaft.

Infrared adaptations appear in distantly related groups such as: bats, rodents, lemurs, marsupials, cats, bears and camels. Phylogenetic experts are still debating the inter-relatedness of these animals but the common ancester may be as distant as 160 million years in the middle Jurassic when global temperatures were much hotter.

This is an atlas and identification key for hair from European mammals. It records only the guard hair and not the underfur so it adds data to the infrared sensor part of this website. The photographs are from random positions along the hair and show very good cuticle features. The transmission results are however variable and some photographs cannot be used. The scale is consistent and there is a ruler. The Mus musculus measurement gave 10.1 microns which agreed very well with the authors 10.0 microns. For most species good band spacing can be obtained. A summary is shown below. 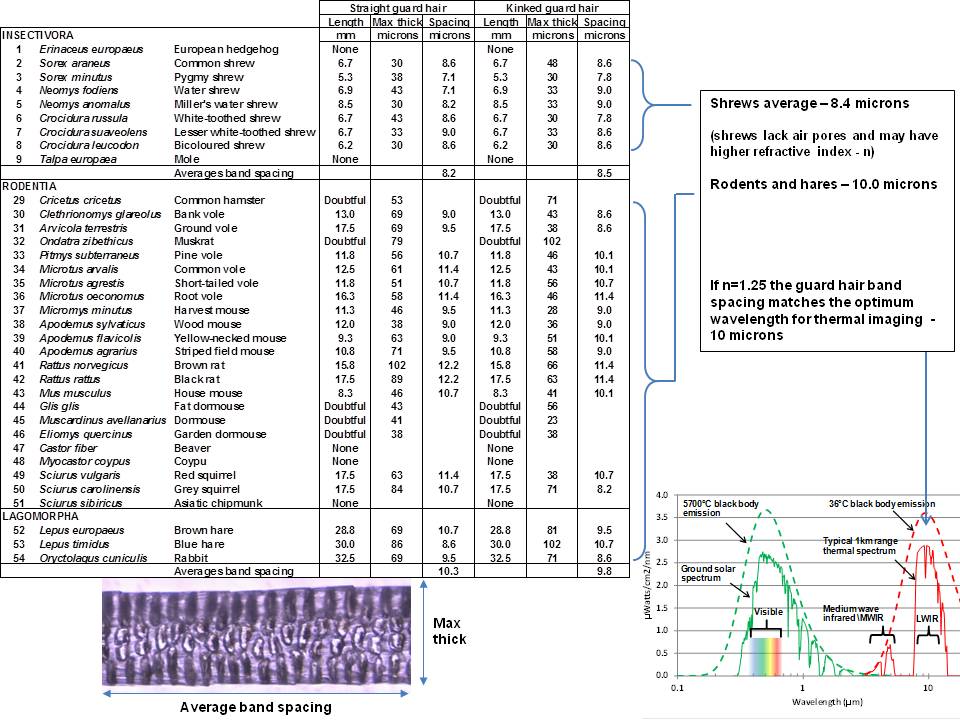 Animals that do not appear to have sensors are the dormice, mole, hedgehog, beaver, muskrat, coypu and chipmunk. Dormice do not have many predators due to a mainly arboreal life. Moles have no need for 360 degree infrared surveillance although sensors on the head or tail area should not be ruled out.

Shrews are distantly related to rodents and hares and the sensors have a different philosophy. The photo below from the common shrew is compressed by 16x. The tip is on the left and follicle on the right. It is tightly tuned with a washboard type design and well-ordered bands throughout the centre of the shield. The average band spacing for shrews is 8.4 microns but we do not know the relation with the wavelength. The outer margin has topology that is not yet understood. In fact the whole design is not understood and antenna specialists should be consulted. Note that the shape of the shield is the same as the rodents and hares.